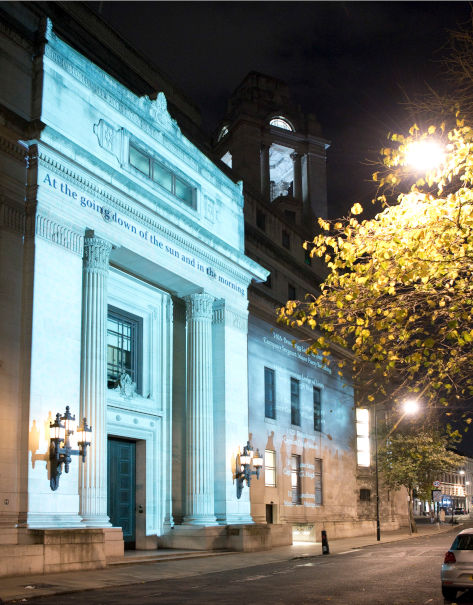 To mark three major anniversaries for Remembrance Day the United Grand Lodge of England (UGLE) has lit up Freemasons' Hall in London with the names of Freemasons who died in WW1 to commemorate the 75th Anniversary of VE and VJ Day, and the Centenary of the unveiling of the Cenotaph, London.

The projection on Freemasons’ Hall will be on display until 9pm on the evening of Armistice Day and has already been shared widely on social media. In addition, more than 500 poppies, donated by Staffordshire Freemasons, are on display in the vestibules inside the stunning Grade II listed building, which was built as a peace memorial after WW1. The names of the 3,000 Freemasons are immortalised in the Roll of Honour within the Hall.

Freemasons have always had a strong relationship with the armed services, and UGLE have worked with Remembrance Penny who have donated a bronze poppy, in a case, inscribed with the words “They shall not grow old. For those Freemasons who died for their country”. Funds raised from the sale of the pennies will go to support Combat Stress to help continue delivering life-changing specialist services to veterans across the UK. The poppy will be permanently situated in the vestibules as a symbol of reflection and contemplation for those servicemen and women who have served their country.

On Wednesday 11 November at 11:00am UGLE will live stream on its Facebook channel the two-minute silence in front of the peace memorial at Freemasons’ Hall, with a bugler playing The Last Post in tribute to those who made the ultimate sacrifice.

“The history of Freemasons’ Hall is directly linked to the Great War. There were more than 3,000 Freemasons killed in action during WW1 and in honour of those members, Freemasons' Hall was rebuilt as a peace memorial to all Freemasons’ who gave their lives for their country. This year, even in a difficult period, we have found a way to remember their ultimate sacrifice.”

In addition UGLE Freemasons will also be taking part in Remembrance Day events across the country. In Guernsey, members will attend the Remembrance Day service at our war memorial and lay a wreath in remembrance of those who lost their lives during WW1. The Royal Guernsey Light Infantry (RGLI) was formed in 1917 and fought in France during the last 12 months of WW1. Of the 2,430 Guernsey men, 230 were killed or missing in action.

Hampshire and Isle of Wight, meanwhile, is home to some of the country's largest and most important army and naval bases, and strong links have been formed during many decades. Many of the Province’s 250 Lodges have a long military heritage, reflected in proudly held names including Fleet Air Arm, Pegasus Forces, Royal Marine, Comrades and Aldershot Camp Lodge. Indeed, three members received the Victoria Cross, Britain's highest award for gallantry, during the Great War. Jon Whitaker, the head of Freemasonry in Hampshire and Isle of Wight, and a senior volunteer with the Royal British Legion (RBL), will lay a wreath on behalf of both local Freemasons and the RBL from all over the Province.

In Middlesex, members will lay a wreath informally at each of 16 war memorials throughout the Province, in order to honour the sacrifice of those who gave their lives for this country’s freedom in various conflicts. The wreaths will be laid by one Freemason at each memorial.

In London, Freemasons are taking part in a parade past the Cenotaph. Others are acting as poetry readers for the London Underground. While in Staffordshire, six members will be attending the National Memorial Arboretum to lay wreaths at the Masonic Garden of Remembrance.

In Worcestershire, Freemason Karl Nicholson and his friend Luke Ford are marching 111 miles over 11 consecutive days with 11kg of dead weight, in aid of the Royal British Legions’ Poppy Appeal 2020. They aim to finish at Worcester Cathedral war memorial by 11:00am on 11 November 2020 and have so far raised £1111.11. They were previously members of RAF Air Cadets, serving adult volunteer staff at 187 (City of Worcester) Squadron.

"We reasoned that the RBL Poppy Appeal might struggle this year, and after the success of a similar walk we did during the lockdown in May (road marching 100 miles in 14 days with 10kg deadweight), raising £1,137 for the RAF Benevolent Fund, we thought we would do it again but upping the stakes to make the challenge more difficult, and of course this time in the cold and no doubt wet conditions.”

Meanwhile in Leicester and Rutland, with Freemasons’ support, a memorial stone commemorating those taken prisoner in the Far East during the Second World War has been installed. Elsewhere, Derbyshire Freemasons will be laying wreaths at a number of locations throughout the Province. While at Freemasons Hall in Derby, the Province will be holding a wreath-laying ceremony at its own monument, which was erected in 2018.

To find out more about the role Freemasons played during periods of national war members of the public can view the online Brothers In Alms website at https://brothersinalms.org.uk. This exhibition of rare photographs spans the period from the Second Boer War through to the end of the Second World War, and features those who led and those who served on land, sea and in the air. It portrays the great landscape of the conflict across all continents and the diversity of the participants.

About the United Grand Lodge of England:
The Premier Grand Lodge, which became the United Grand Lodge of England, was founded at the Goose and Gridiron Pub in London in 1717.
It has 48 Provinces across the country and more than 7,000 Lodges, with students over the age of 18 able to join one of the 85 University Scheme Lodges.
Freemasons use four important guiding principles to help define their path through life: integrity, friendship, respect and charity.
One of the oldest social and charitable organisations in the world, Freemasonry’s roots lie in the traditions of the medieval stonemasons who built our cathedrals and castles.
Membership is open to people from all backgrounds and the organisation’s aim is to empower members to be the best they can be – it’s about building character, supporting members as individuals and helping them make a positive contribution to society.
Freemasonry is one of the largest charitable givers in the country, contributing more than £48m to deserving causes in 2018 alone. Freemasons do not only donate money – more than 18.5 million hours of volunteer work were undertaken by Freemasons in 2018.