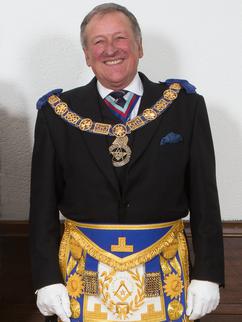 William (Bill) Charles Mason Dastur was born in 1952 and was educated at Peter Symonds’ School Winchester and Pembroke College, Cambridge.

He was initiated into Alma Mater Lodge No.1492 in 1986 and attained the Chair in 1993. He served the Province first as Provincial Grand Registrar and later as Provincial Grand Treasurer between 2003 and 2012 receiving a first Grand Lodge appointment as PAGDC in 2005.

In 2012 he was appointed Deputy Provincial Grand Master and promoted to Past Grand Sword Bearer in 2013, whilst in the Royal Arch, he was appointed as Second Provincial Grand Principal in 2008 and promoted to Past Grand Standard Bearer in 2013. He is a member of Euclid Chapter being Exalted in 1991 and became its First Principal in 1999.

Outside of Freemasonry he is a keen golfer and active skier. He still plays a little cricket at village club level with his son and also enjoys playing Bridge. He has attained the honour of Freeman of the City of London and is a Liveryman of the Worshipful Company of Coachmakers and Coach Harness Makers of London.