And complete your journey in pure Ancient Masonry

Continue your Masonic journey by becoming a Companion of the Order

The Ceremony of Raising implies that there is more to learn, for it urges us to lift our eyes beyond our civil duties and routine existence. The Royal Arch develops this theme because it teaches us that the true secrets of a Freemason are to be found within ourselves.

Members of the Royal Arch are known as Companions and meetings are called Convocations. Companions wear unique regalia.

When a Freemason has attained the rank of a Master Mason he is then entitled, after a period of one month, to be exalted into a Royal Arch Chapter in order to complete his journey in pure and Ancient Freemasonry. 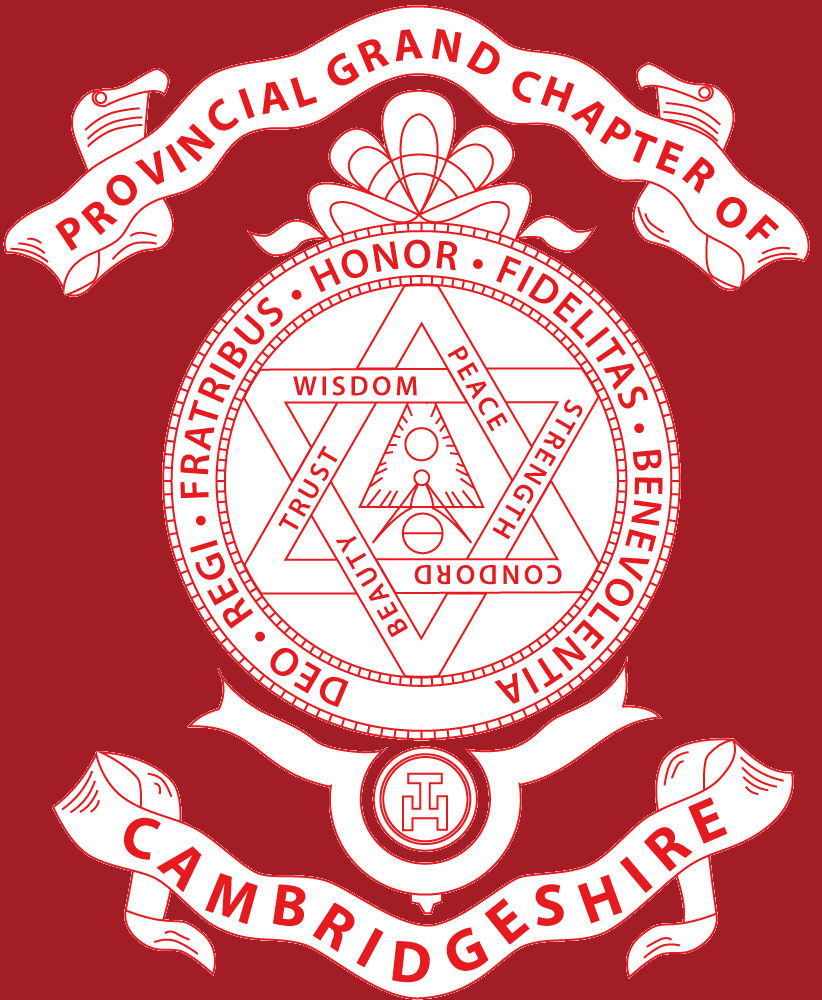 Within English Freemasonry there exists an indissoluble link between Craft Freemasonry and the Supreme Order of the Holy Royal Arch.

Together they constitute “pure Ancient Masonry”, as defined in the preliminary declaration of the Act of Union that in 1813 created the United Grand Lodge of England (UGLE).

Royal Arch Chapters meet independently of Lodges, and meet no more than 3 times a year. The fees are typically considerably less than for Lodges. A Chapter is normally attached to a Lodge and in Cambridgeshire there are 14 Chapters. 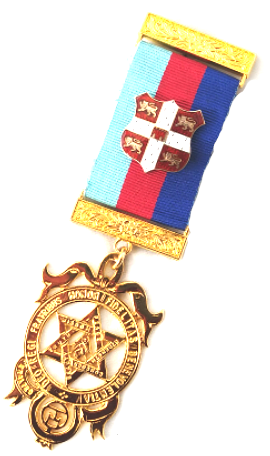 The regalia is different to a Craft Lodge. It consists of an Apron with red and blue surround, a red and blue sash and a special Jewel which Royal Arch Masons should also wear in their Craft Lodges in order to show the bond that exists between Craft and Royal Arch. 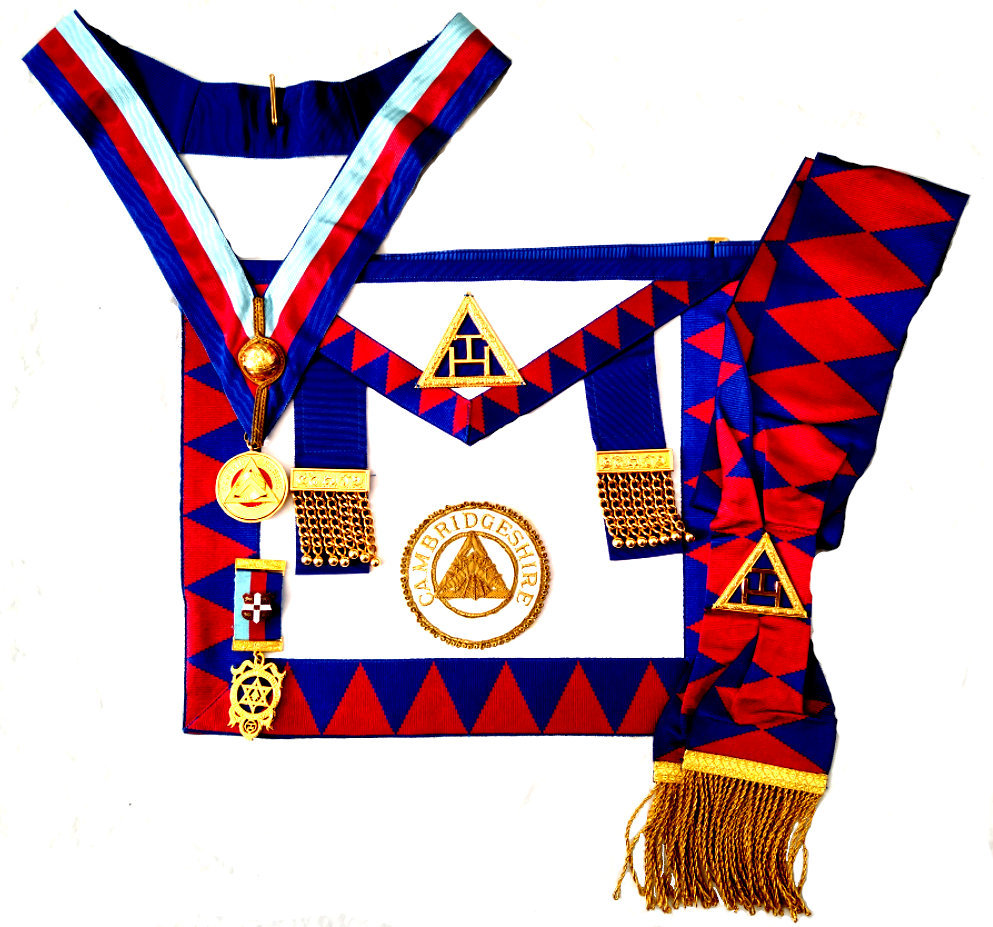 As in all Masonic degrees, the ritual of the Royal Arch is an allegory. It helps to focus the minds of the Companions, without conflicting with their religious beliefs, to a contemplation of the nature of, and their relationship with their God which will be appropriate to their own religion.

A Royal Arch Chapter has a number of officers with particular titles but most important are the three Principals who collectively rule the Chapter for one year. Each year there is an Installation meeting for the new team of officers.

A Royal Arch Chapter has a number of officers with particular titles but, most important, are the three Principals who collectively rule the Chapter for one year. Each year there is an Installation meeting for the new team of officers.

Like Craft Freemasonry, the Royal Arch is open to men of all faiths.

+ - Who is eligible to join the Royal Arch? Click to collapse

A Mason may join a Royal Arch Chapter four weeks after being Raised to the Third Degree. It is the natural and traditional next step in Freemasonry. Joining a Chapter will extend your circle of Masonic friends, but you will be under no pressure to learn new ritual until you are ready to do so.

It is the completion of your journey through pure, Antient Masonry. In its earliest days the Royal Arch degree was often worked in a Craft Lodge as a fourth degree. Indeed, for many years following the reorganisation of Freemasonry after the Union of the Grand Lodges in 1813, the Supreme Order of the Holy Royal Arch was stated to be the completion of the Third Degree

The Ceremony of the Third Degree is set against the backdrop of the completion of King Solomon’s Temple and we might expect that, at its conclusion, the new Master Mason would be able to reflect upon the complete masonic journey. In reality, the Third Degree leaves us with more questions than answers.

The Royal Arch takes us forward in time well over four centuries and answers those questions.The ceremony also has a strong allegorical interpretation. In the degrees which you received in the Craft you were taught that Freemasonry is a system of morality, based on a belief in The Great Architect of The Universe and promoting brotherly love, relief, and truth as the rule for your earthly pilgrimage. The Ceremony of the Third Degree implies that there is more to learn, for it urges us to lift our eyes beyond our civil duties and routine existence. The Royal Arch develops this theme because it teaches us that the true secrets of a Freemason are to be found within ourselves.

+ - Where does it fit relative to the Craft? Click to collapse

For nearly 300 years Masons have completed the traditional Masonic journey from Initiation to the Royal Arch. It has a unique position as part of the mainstream of Freemasonry, so that it and the Craft are totally complementary, and are together described as forming pure, Antient Masonry.

+ - The Royal Arch and the Craft Click to collapse

The Royal Arch Regulations are in the Book of Constitutions of Grand Lodge which are presented to every new Mason at his Initiation. Chapters meet less frequently than Lodges, commonly three times a year. Joining Fees and Annual Dues are usually less than those of the Craft. The Royal Arch is consequently less challenging in terms of cost and time, but no less enjoyable.

There are other Masonic Orders, all of which require Craft membership as a pre-requisite; many of them also requiring candidates to have been exalted into the Royal Arch. Usually, a Royal Arch Chapter is attached to a specific Lodge, and will often use its name and number, though not all Lodges have a Chapter. It follows that members will come from different Lodges, and perhaps from neighbouring Provinces.

+ - What are the Royal Arch Ceremonies? Click to collapse

Apart from the Installation, there is only one ceremony in the Royal Arch ritual, that of the ‘Exaltation’ of a new Companion. After the darkness of the Third Degree, it is a colourful, enlightening and dramatic ceremony, with profound, challenging, allegorical significance. The story told contains some of the most delightful lines of Masonic ritual.

Every Lodge in Cambridgeshire has a Royal Arch Representative named on its Summons. There will always be Brethren, including your Lodge Mentor, eager to give advice about joining the Royal Arch and make the necessary introductions. A Lodge Summons will give details of an attached Chapter, although it is not obligatory for a Brother to join the Chapter attached to his Lodge.

If you are unable to obtain an introduction to a Chapter, please contact the This email address is being protected from spambots. You need JavaScript enabled to view it..